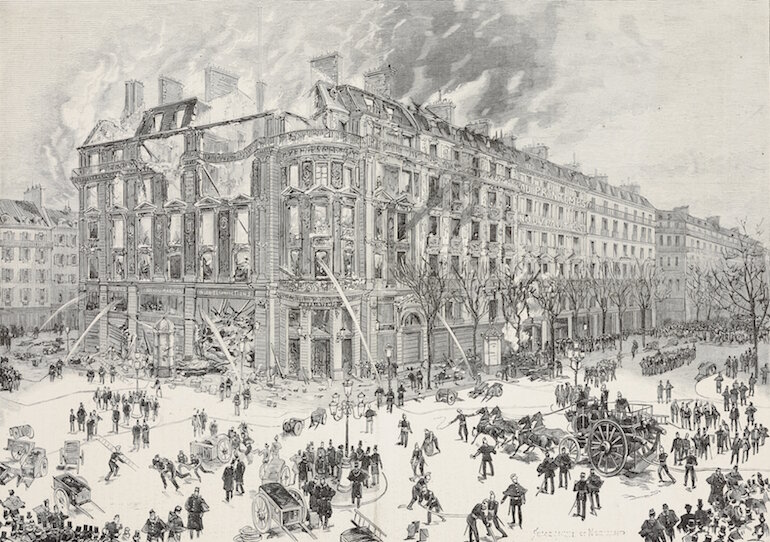 Who could have imagined that one fire would create such a huge impact on American genealogy research?

In January of 1921, a fire broke out in the basement of the Commerce Building in Washington D.C., where the 1890 U.S. Census records were being stored.

Firefighters battled the blaze for hours, but the damage was done. The vast majority of the census records were either burned, or completely soaked in the ankle-deep water that filled the basement.

There were calls from historians and genealogists to restore the damaged census records, but much to their despair, Congress authorized the destruction of the records in 1934.

Fortunately, the fire did prompt discussions about the need for secure storage of national records, and just one day before the 1890 census was authorized to be destroyed, President Herbert Hoover laid the cornerstone for the National Archives Building.

Today, family historians must seek other records to cover the time period between the 1880 and 1900 U.S. censuses. This article will explain what parts of the 1890 census survived, some tips to help focus your research, and introduce some of the most important 1890 census “substitutes.” Even though the 1890 census is gone, we can still discover how our ancestors lived at the turn of the 20th century!

Be sure to also read our complete guide to census records for genealogy.

The 1890 census enumerated over 60 million American residents. Although the majority of the records were destroyed, the surviving census schedules contain valuable information for over 6000 individuals.

The 1890 census differed from previous censuses, in that the enumerators were directed to prepare a separate schedule sheet for each family, rather than list multiple families on each sheet. The schedules also included questions about race, home ownership, and immigration status.

Always check if your ancestors may be found in the surviving 1890 census records before seeking substitute records. The following states have surviving fragments of the 1890 census, and you can find out which counties or cities are included by visiting the National Archives website:

Additionally, a separate section of the 1890 census enumerated Civil War veterans and widows. The goal was to record surviving Union veterans, but some Confederate soldiers were also included. Although the (alphabetically-sorted) records for the states of Alabama through Kansas are mostly lost, records for Kentucky through Wyoming remain and are available to research online through FamilySearch.

Before seeking out 1890 census substitutes, it’s important to hone your research skills so that no valuable information is overlooked.

These local censuses often collected similar information as the national census, including details pertaining to a person’s naturalization status and where they were born (state census records will be discussed in further detail below). As another example, the local newspaper or county clerk in your ancestor’s area may have published an annual list of births, deaths, or marriages.

Use the FamilySearch Wiki to help get started in your locality research. Also look for local libraries, historical societies, and genealogical societies in your research area. Researchers and volunteers at these facilities are happy to point you in the right direction and can help you locate records that are not available online.

Putting the evidence together

Make sure you are squeezing every drop of important information from the records you find. Creating forms, charts, and timelines can help to organize information and paint a bigger picture of your ancestor’s life in between the census records.

Tables can be especially helpful when researching your ancestor year-by-year in City Directories (more information on city directories can be found below). Tables are often easily made in your home word-processing program, and the FamilySearch Wiki also provides some helpful resources for charts and forms.

The loss of the 1890 census left a 20-year gap in our ancestors’ lives, and trying to find records to fill the void can quickly become overwhelming. Use what you already know to formulate a detailed research question that can help narrow your focus.

For example, “When did John Smith, born in Omaha, Nebraska in 1870, marry Jane Jones, who had 3 children with John according to the 1900 census of Topeka, Kansas?” This question indicates that we are trying to find a marriage record for John and Jane.

The additional details included in the research question indicate that we already have some important pieces of information that can point us in the right direction.

These records should be at the top of your list when searching for 1890 census substitutes!

City directories are among the best resources to fill in the years between the census. Directories are filled with valuable information about our ancestors and the communities in which they lived. Many city directories have been digitized and can be viewed on sites such as Ancestry.

If the city you need is not available online, check with the local library, genealogical society, or historical society, as they often have original or microfilmed directories available for research.

U.S. city directories were generally published annually, and have been around since the late 1700s. As advertising potential in directories grew, they became published and distributed in even the most rural towns. In the 1930s, phone books began to replace directories.

City directories can provide much more information than just your ancestor’s name and address:

Ancestry’s “1890 Census Substitute” collection is composed of city and local directories from many cities and localities from 1885 through 1895.  This is a great place to get started on researching city directories.

Some states conducted their own censuses in between the years of the Federal census. For example, the state of New York conducted several censuses, including one in 1892. Information that can be found in the New York census includes name, age, birthplace, enumeration place (town and county), and sometimes occupation.

Note that some New York counties are missing, so be sure to research where your ancestor lived to know if a census record is available. Ancestry provides some helpful information on the 1892 New York state census.

The U.S. Census Bureau provides a helpful list of states that conducted censuses, and what years they were taken.

Voter registration lists are also an excellent census substitute, as they contain similar information to what is collected on the census schedule.

For example, Chicago, Illinois Voter Registration rolls are available for 1888, 1890, and 1892, and include names, nativity (country of birth), date and place of naturalization, how long the voter has lived in the precinct, county, and state, and their current address.

Remember that women did not gain the right to vote until 1920, so your focus should be on male ancestors when looking for voting records prior to that date.

The FamilySearch Wiki is a great place to learn more about voting records.